In Baltic Sea, volumes for 2020 showed a 3% increase compared to 2019 primarily due to the large beer campaign in Finland in Q4. Net revenue showed a 2% decrease and was affected by the product and channel mix. EBIT increased to DKK 675 million and were DKK 21 million above the 2019 figure. The EBIT margin increased by 1 percentage point from 19.8% in 2019 to 20.8% in 2020. The earnings development was positively affected by tight cost management during the lockdown periods and the acquisition of Bauskas. 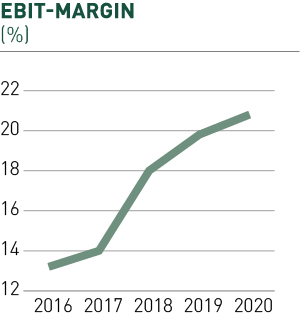 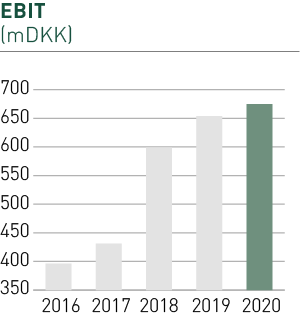 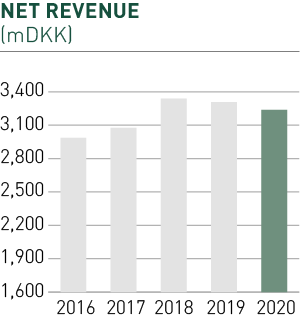 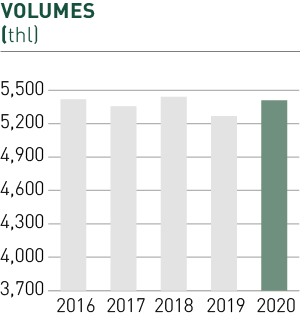 Development and initiatives in 2020

The Baltic Sea segment was also impacted by the COVID-19 restrictions, but to a lesser extent as well as at a later stage for some of the countries compared to Italy and Denmark. Due to a fast response and great flexibility, we succeeded to obtain an even better result than in the record year 2019, and at the same time we gained market share.In Finland, we continued the premiumization of our beer portfolio, with our brands Aura, Lahden Erikois and Lapin Kulta Pure. We also continued our efforts in the low/no sugar /alco area, including introducing a new Lapin Kulta 0.0%, and our portfolio delivered very strong growth rates.

In the Ready-to-Drink category, Original Long Drink continued to grow. The campaign “The greyest day of the year” reached 480.000 participants in 2020 compared to 200.000 the year before and despite COVID-19. In 2020, we continued our innovation adding new tastes and the Original Long Shot to the portfolio.

In the Baltics, we have been less impacted by COVID-19 as we are less dependent on the On-Trade channel in this region. CULT energy was introduced to the market in 2020 and was well received by the consumers. The beer sale in Lithuania and Latvia has developed positively, supported by products from our latest acquisition Bauskas, which are performing better than expected. The addition of Bauskas in Latvia has strengthened our multi-beverage model in the Baltics. Bauskas is now fully integrated into the business, which has strengthened our presence in the craft beer segment in the country. We have also successfully captured new customers in the On-Trade segment as a result of the acquisition.

On 1 March 2021, Bauskas was moved to our group-wide SAP system.

Zero Zone in supermarkets
In all countries in the Baltic Sea segment we are gaining ground with our low/no beverage portfolio, with PepsiMax leading the growth, and supported by our own strong local brands such as Jaffa and Enjoy. To make the choice even more visible for consumers, we have established Zero Zone areas together with the supermarkets – efficiently presenting our no sugar and no alcohol products.

To enter this site, you have to be at least 18 years old.